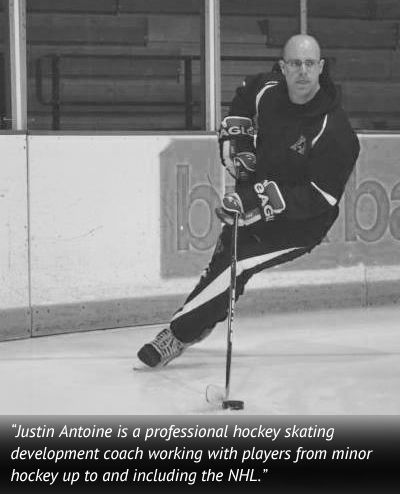 Justin is a professional hockey skating development coach working with players from minor hockey up to and including the NHL. Justin focuses on making sure the players speed, agility and efficiency is increased for the game of hockey. Players will learn not just the skating techniques, but also learn to do it with a puck in game and position situations. Antoine Skating develops stronger hockey skating players.

Justin is the former Skating Coach for the Brampton Battalion OHL 2009/10, was a amateur scout for the Toledo Walleye ECHL 2008-2012. Justin was also the head power skating coach for Can/Am Guelph Hockey School from 2009-2012 and power skating instructor for the 2013 and 2014 OHL Officials Combine Camp. Justin also has a BA in Criminology from Carleton University.

Doug is a professional hockey skating development coach, and formulated an Efficiency Skating program over 25 years ago that emphasizes the proper biomechanics for hockey skating to maximize power and speed. Doug's program also includes how to skate with a puck for your position.

Doug has developed the skating for players in the NHL, OHL, NCAA, and European Elite Leagues, his client list includes players such as Tom Kostopoulos, Chris Kelly and Trevor Daley. Doug also has extensive coaching and bench experience and helps teams formulate practice plans, positional skill development and strategy. Doug has a BA in Psychology from University of Waterloo.